Artists love to paint.
And sometimes bigger is better.

I started out painting my own walls.
I chose to use de Lempika paintings as my source.
If I had created an original work of art,
it would have broken my heart to have it painted over if I ever sold my house.

This is the stairwell to the second story.

This is another de Lempika image.
(Seeing a trend here?)
Not easy to get a good photo because of the angle
but this is in the front entryway.

It is painted on a piece of drywall,
so I could probably take it with me if I moved. 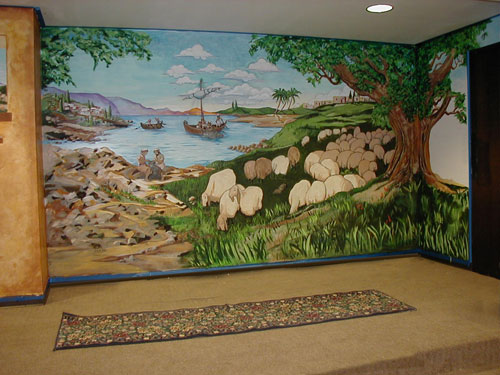 This scene was for a little theater space
in a Sunday school room at Bethlehem Lutheran Church in Minneapolis.

I thought my sheep were fabulous,
even if they were the wrong breed for that geographical area. 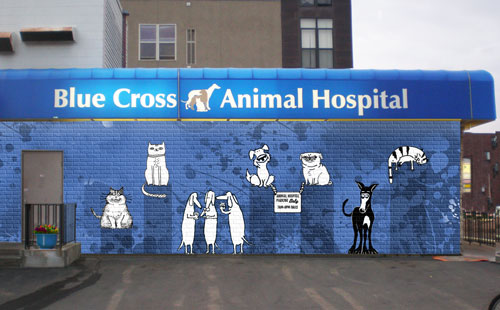 The Tangletown Neighborhood Association sponsored a mural project
as a way to discourage graffiti on businesses
and encourage local artists.


After two weeks of preliminary sketches, even putting
the clinic staff's pets in the picture, the clinic owner backed out
because the foundation was cracked.

It would have looked like the above. I try not to be bitter.... 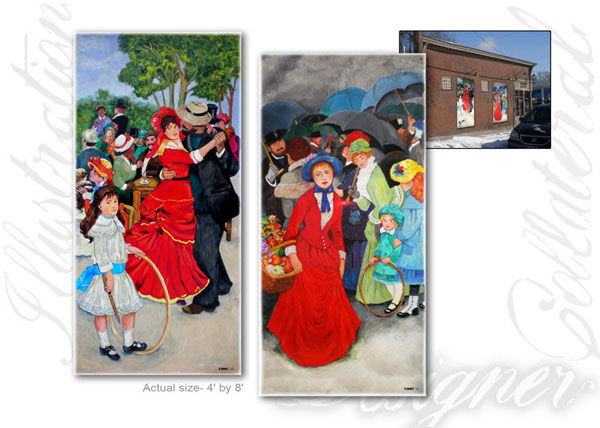 For an outdoor mural project, it was decided to paint on
marine grade plywood for a couple reasons. One, it was February in Minnesota.
Two, the murals could be put up and taken down
if there were building or brick issues.

I had several students from the local high school
as helpers, and since they were studying the Impressionists,
we used multiple masterworks (Manet and Renoir) and combined them into one.

I loved painting at that scale so much
I painted a companion piece.

Okay, technically not a mural, but it's also fun to paint furniture.

This was a butt-ugly dark red jewelry cabinette
that didn't go with anything else in the house.
Ergo--